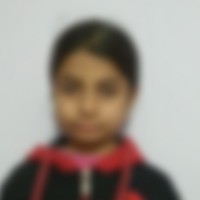 Fatima, an orphan from Homs province

Fatima is an orphan who suffered a lot! Her father martyred in 15-04-2012. She stayed away from her mom and lived with her brother at their grandmother’s house. She is living in Turkey now. Fatima was born in 11-01-2008. She is so hardworking and good at school. Her hobbies are drawing and using computer. Fatima is looking forward to being a doctor so she will be able to save people’s lives! Fatima’s smile was stolen! We hope to be able to draw it again on her face.