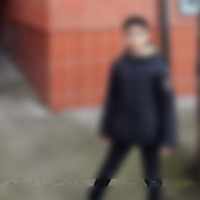 Abdullah is an orphan boy from Homs

Abdullah becomes an orphan on 19/12/2017 after the death of his father when his heart stopped due to repeated epilepsy seizures. Abdullah is a child born in the city of Homs on 6/1/2008 . He lives with his mother and his brother Hamza in a rented house in Istanbul, Turkey, consisting of two rooms, a kitchen and a bathroom. Abdullah, despite his young age, but tried to commit suicide more than once because of Maryam game , and he’s having psychological support sessions as a result of psychological harm after the absence of his father and what the game had caused damage to his brain. Which prompted his mother to learn the basics of psychological support for children. She has a strong will to learn new skills to work and raise children. Abdullah's mother has a good and positive awareness despite the difficult circumstances and pressures she experienced with her husband's parents and her family. Abdullah suffers from other psychological problems of fear and violence and defended revenge because of the abuse suffered by his uncle, hence no communication between Abdullah’s family and his relatives . He is a very intelligent, interactive, social and fun child. He likes football a lot and archery. His level at school is excellent, aspiring to become an engineer in the future. He has no breadwinner.