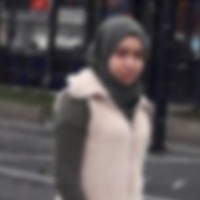 Ghodon , an orphan girl from Damascus

She was born on 1/1/2005 , originally from Damascus but moved with her mother and brother, and her eldest brother's wife with her daughter to live in Istanbul, Turkey. The house is rented, consisting of two rooms and a living room. Their living situation is very bad because there is no fixed income for the family. There is no food at home. The mother can not work because she did not have any skill, and the father was martyred in 2012 after being hit by a bomb which killed him . Ghodon quit school totally , but she’s going to start slowly from beginning . She is smart child and interested in her future, social and nice. She loves hairdressing and interested in cosmetics. They have no breadwinner.