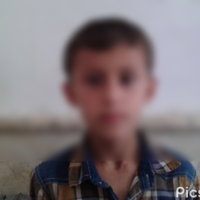 Esam is an orphan boy from Aleppo District

Esam is an orphan boy, he has witnessed his father's murder by the regime's forces in Aleppo .. The doomed day was on 11/January/2013 .. Esam still lives in Aleppo with his mother and brother at their relative's house ... He was born on 1/January/2009 God is to be thanked that he still goes to school and is doing well .. Esam is a quiet and sociable child, he collects coins and wishes to become an English teacher when he grows up ... Oh Esam, you certainly deserve better days that shall make you forget the miserable days you have encountered ..