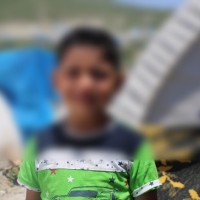 Kadri, an orphan from Latakia province

A lot of reasons and thwarts but the pain is one! Kadri lost his dad in the jail of regime after a year of his birth. Kadri was born in 08/03/2012 and his dad got arrested in 13/06/2013. Kadri's mother suffered a lot after her husband was arrested because she had no provider but Allah then her father. She lives with her son Kadri in the refugee camps in rebel held areas. She takes money from her husband's father to be able to cover her expenses and her son's expenses too! Any way her situation is deteriorating . Kadri is a smart child and loves studying, social and fond of arguing . He loves drawing, playing and painting. He does not have a provider. Help him!