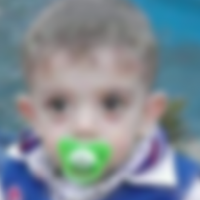 Abudl rahman was born on the 25th of May,2012. He lives with his mother and his siblings in Albeqqa'a, Lebanon. In the middle of the events, his father was martyred in 2015 and they don't know anything about him till now. . Abdulrahman lived without his father and he knows him only by the pictures he saw him in and he doen't remember him at all. He loves cars and he loves playing. He started preschool and he still have a long way that he can't keep move on unless he have a supporter.